Do you know I legit had to google a name for these things? I know
they aren’t exactly mandazi, I am also aware they aren’t doughnuts
because they aren’t round and have no hole in the middle. Someone told me they are called beignets; but I refused, that name sounds too fancy for a “drogba”; which is what I have always called them from way back in high school. They went by different names then; people calling them names like “muno mukabi, bunduguza, defender, and many more names like that. There was just no way a buludozer was going to be renamed as a beignet. Below is a recipe I used to make these, feel free to copy and try it out yourself.

Add the butter into the mixing bowl, combining it with your
fingers until you achieve a fine crumb.

Create a well in the middle of the flour and add the egg and vanilla extract. Mix well.

Add the milk, a little at a time and mix well until everything in the bowl is well combined. The dough should be soft and pliable, but should not stick to your clean hands.

Form the dough into a ball, place in a container with a lid and cover. Let the dough rest for at least 30 minutes.

After 30 minutes, place the dough on a lightly floured working surface and shape it into a disc. Then lightly flour your rolling pin to prevent the dough from sticking to it.

Use the rolling pin to spread the disc to a sheet of dough of about 1/4-inch thickness then using a knife, cut out shapes on the
sheet of dough. Place these cut-out shapes on the floured baking sheet. Gather the scraps of dough into a ball and re-roll and cut shapes out of this. Repeat until all the dough is used up.

Heat your oil to medium-high heat. You don’t want it too hot because you want your mandazi to cook evenly, not a scenario where the outside of your mandazi cooks well while the inside is not ready. On
the other hand, if your oil is not hot enough, the mandazi will absorb a lot of oil as they will sit at the bottom of the pan for too long before rising.

Once you have confirmed that your oil is ready, gently drop the shaped dough into the pan one at a time without overcrowding the pan.

At the right temperature, your mandazis should cook for at least 4 minutes on each side and you will know they are ready when
they have a nice golden brown colour. At this point, you can transfer them to the lines colander to drain excess oil, then serve warm. 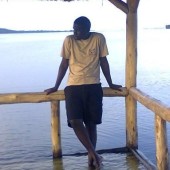 Oh hello there, thanks for stopping by. I am Balamaga Rogers, the author of this website. I am married to the awesome-st wife, a father to the cutest little girl, and owned by the fluffies maltese. As you might have figured by now; I eat, I cook, and run this website. I also do lawyer-ly things from 8-5 so I can afford to eat, cook, feed the girls and maintain this website. Besides this website, I have a weekly column in Uganda’s leading daily where I do the same thing I do here; share my personal cooking experiences and the recipes that I have tried and have worked for me. Welcome to my website.